farlane.blog › Edit — WordPressIf the front pages of CNN or FOX are to be believed, somewhat quieter than Palin on SNL or the profound life changes experienced by Joe “The Plumber” the Plumber.

Hard to fathom how that could not be THE story for today. Here’s NPR’s report on the largest rally from the campaign, These Photos and That Video and This Video of That One in St. Louis: 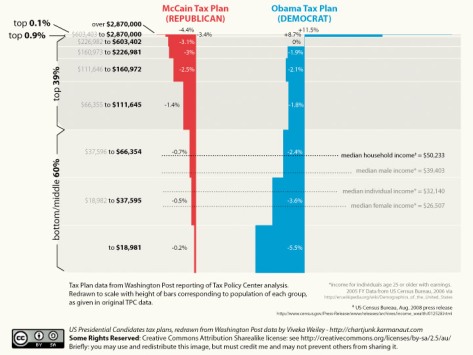 In addition to lies, damn lies and statistics, there’s also charts and graphs that are so bad you can’t understand the data they’re trying to convey.

I got this image from a post about Tax Plans of McCain & Obama (click through to see it bigger) from a cool blog called chartjunk. The author writes:

There’s a graph (visible at the link above) that Obama supporters are sending around, showing the differences between the Republican and Democrat tax cut proposals. It shows that Obama is not in fact planning to raise taxes – he’s planning to cut them for all but the very, very rich. I couldn’t help but notice though – the graph is still massively weighted towards the interests of the super-rich. For example, the bottom two-thirds of the population are given only a third of the space on the graph, while the top 0.1% of the population – one in a thousand people – gets almost 10%. What’s more, an “average tax cut” is then given, which seems to have been derived from taking a total of the nine income brackets shown and dividing it by nine. Journalists should really volunteer to take remedial arithmetic, you know. Once again, this ignores that one of the brackets represents one thousandth of the population.

In the very informed comments, it’s noted that folks making less than $66,354 make up nearly 2/3 of the population (63.4%). Those folks will be getting a less than 1% cut from the McCain plan. I suppose that they can just hope for a little trickle-down…

I think the thing that’s most interesting to me about the graph is that the McCain plan proposes to continue the cut, cut, cut mantra of recent years while simultaneously committing to ongoing (and expensive) military operations.

Where will the money come from, Mr. Wizard?

For me, Wikipedia is something I open several times a week to answer specific questions. The other day, I happened to go to Wikipedia’s front page and was impressed by what was there. A few highlights from today:

If you want to get really crazy, check out all their portals and dive into Michigan or Anime & manga.

Image: Wikipe-tan icon by ja:利用者:Kasuga. I so do not understand what is up with that picture. Or this one.

Well, apparently there’s a Karl Rove for folks who think like me now too. Our Karl Rove has a little advice for Barack Obama about political messaging regarding his energy plan. He says that Obama’s New Energy ad leave him flat, and suggests Obama may have come down with (horrors) Democratitis and that:

Ultimately, the Obama campaign should define 3-4 pillars that completely encompass your brand, your priorities, and your values. These pillars should be labeled aspirationally, and should act as sub-brands that people can use as linguistic shortcuts to easily and readily discuss the ideas.

To help make the point, which conversation can you imagine happening at the water cooler or over the dinner table?

“So, what do you think of Obama’s energy plan, where he is going to make energy independence an urgent priority, raise mileage standards, fast-track technology for alternative fuels, and give us a $1000 tax rebate?”

“So, what do you think of Obama’s energy plan, you know, that ‘Free, Clean and Green Country’ thing where we become free from foreign oil while also cleaning up the pollution by investing in green technologies to help make America beautiful again?”

See the difference? People are much more likely to discuss and share your plans when they’re wrapped in a compelling brand than if they are just a list of policies.

I’ll take “b” please … and hold the Democratitis please. The doctor says I have to watch my partisanship. (though I will say that the next person who says “Drill! Drill! Drill” to me just might get what they’re asking for)

The photo is starfish hill by the inhabitant (be sure to view bigger), who asks the philosophical question of the day: Is there such a thing as ‘clean’ energy? I’d say that in the sense of “Is that scene or any other with manmade windmills or solar panels pristine”, no. However, if you look at it as us being a part of creation like a turtle warming itself on a rock, then yes.

the inhabitant is also known as Richard Baxter, and he’s one heck of an artist with camera, computer or brush. Check out studiobaxter.

Be warned, however, for it appears that there is no richard baxter.

We know what a criminal White House looks like from “The Final Days,” Bob Woodward and Carl Bernstein’s classic account of Richard Nixon’s unraveling. The cauldron of lies, paranoia and illegal surveillance boiled over, until it was finally every man for himself as desperate courtiers scrambled to save their reputations and, in a few patriotic instances, their country…

…Nixon parallels take us only so far, however. “The Dark Side” is scarier than “The Final Days” because these final days aren’t over yet and because the stakes are much higher. Watergate was all about a paranoid president’s narcissistic determination to cling to power at any cost. In Ms. Mayer’s portrayal of the Bush White House, the president is a secondary, even passive, figure, and the motives invoked by Mr. Cheney to restore Nixon-style executive powers are theoretically selfless. Possessed by the ticking-bomb scenarios of television’s “24,” all they want to do is protect America from further terrorist strikes.

So what if they cut corners, the administration’s last defenders argue. While prissy lawyers insist on habeas corpus and court-issued wiretap warrants, the rest of us are being kept safe by the Cheney posse.

(cue spooky music and exit to strains of torture, lies and the destruction of our nation’s moral compass)

The photo is Trapped by Lincolnian and is part of his Abstracts set. I liked the old postboxes too.

I think it’s pretty critical that the future have jellyfish airships.

Well, this is just goofy:

Sleeveface.com defines sleevefacing as one or more persons obscuring or augmenting any part of their body or bodies with record sleeve(s) causing an illusion.

Flickr is apparently not entirely unaware of Sleevefacing, as the LP Portraits group, Sleevefacing group and Flickr sleeveface slideshow demonstrate.

The photo is all of me by unsure shot, and she’s definitely brought out a new side of Willie!

It’s part of her Sampler set … though I’m kind of partial to the Matchbox Pinhole collection.

Lifehacker dished a link to this Talk of the Nation feature How to Be a Productive Procrastinator with and Dr. Timothy A. Pychyl of the Department of Psychology at Carleton University in Ottawa, Canada and author of the blog Don’t Delay at Psychology Today and “structured procrastinator” John Perry who claims to have discovered a way to “convert procrastinators into effective human beings” and uses their bad habit. He writes:

Structured procrastination means shaping the structure of the tasks one has to do in a way that exploits this fact. The list of tasks one has in mind will be ordered by importance. Tasks that seem most urgent and important are on top. But there are also worthwhile tasks to perform lower down on the list. Doing these tasks becomes a way of not doing the things higher up on the list. With this sort of appropriate task structure, the procrastinator becomes a useful citizen. Indeed, the procrastinator can even acquire, as I have, a reputation for getting a lot done.

Dr. Pychyl has some thoughts about this. I think that I have begun to grope towards doing something similar. My work in webdesign/new media/marketing/blogging/Michigan obsessing/whatever the heck it is that I do for a living seems to rely on an awful lot of tasks. These all seem to be able to bleed time from things I mentally classify as more important.

Perry some pretty funny (and insightful) essays that I read while procrastinating on a number of other more urgent tasks like A Plea for the Horizontally Organized and Laptops and Lab Manuals.

The photo is Goodbye, Cubicle Land by pairadocs, who is apparently saying goodbye to cubicle land on Monday. His blog says he’s cleverly disguised as an adult. I don’t know about that but he does build a mean model.

It’s all very terrible and wrong and what about generations unborn … and then I wonder: is it so terribly wrong to want (and take) more than you can afford?

The ties that bind:

Lessig points out, this is “the beauty of political remix“

Last week I read A feature in Wired that after some who-said-what video about McCain staff apparently violating 527 group rules explained that:

The video footage came courtesy of the Democratic National Committee, which late last year launched a project called FlipperTV. The project collects amateur video footage from campaign events as they unfold and makes it available to everyone on the internet to browse through and to edit for themselves.

The idea, according to the DNC at the time, was to “allow activists and voters to download video to their computers, edit it to create new user-generated video, and judge the candidates’ flip-flips and exaggerations for themselves.”

…David All, a Republican Web 2.0 media and communications consultant in Washington, DC, says that he first blogged about the idea of crowdsourcing online video footage long before the DNC launched its FlipperTV project …”It’s a common-sense crowdsourcing idea,” All said of the FlipperTV project. “It’s simple stuff you’d do on a modern campaign to contrast a candidate’s positions.”

How cool! Both major political parties working to create viral propaganda machines and even working with groups that exist solely to support or attack candidates. It’s like war, only on TV and the internet.

The 2008 elections are going to be something to watch, that’s for sure.