Rolling Stone columnist Matt Taibbi is hands down my favorite pundit out there right now. In his latest column, Republicans Have Their Worst Week Ever, he writes that watching the GOP over the past week has been like watching the Three Stooges try to perform a liver transplant on roller skates.

Consider: Conservative action group Political Media launches Gun Appreciation Day and got 50 million people (which is a not insignificant 1.6%) to sign a whereas-packed petition that concludes with the money shot of:

Therefore, We the Undersigned petition the United States Government to cease and desist all efforts to disarm or short-arm the American people by limiting and disparaging the Second Amendment or rendering it a dead letter through federal legislation, interpretation and regulation.

I don’t even know what the means legally, except that maybe if you try to short arm them you’ll end up in the dead letter office.

But even before their excellent idea gets out of the gate, it stalls out, as obnoxious reporters check the list of “Gun Appreciation Day” sponsors and find that the “American Third Position,” a group that purports to represent the “unique political interests of White Americans,” is one of the event’s sponsors.

So now, Political Media has not only decided to hold its Gun Appreciation Event on a holiday meant to celebrate the life of a black leader who was a symbol of nonviolent protest and who was killed by a white man with a gun, it’s done so with the financial help of some yahoo white supremacist group. But this doesn’t derail the whole thing, as it’s of course just an innocent mistake. Political Media kicks “Third Position” out and appropriately issues a statement, saying, “We have removed the group and reiterate this event is not about racial politics, it is about gun politics.”

So far, so good, right? Well, then they go and actually hold their “Gun Appreciation Day” rallies all over the country, on Martin Luther King Day. And what happens? Five people get accidentally shot!

Definitely read on for more examples of Herculean idiocy including the suggestion that the film Django Unchained makes the argument for gun rights because there wouldn’t have been slavery if slaves had gun rights. Brilliant!

Here’s Matt on Totally Biased w Kamau Bell. A great interview on a great show, and I extra-heartily encourage you to watch Matt Taibbi & Chrystia Freeland on Bill Moyers show that explores income inequality, which is at its greatest in recorded history right now. Come on, watch it.

Kevin Dooley provided the photo and the title of this post, Guns, etc. Kevin is a wonderful photographer who shares his photos via Creative Commons, about which he writes (in part):

If you don’t care about making money from your images (at least at this stage of your life) but want them broadly seen, then you have to label your photos as Creative Commons and get on the open source photography bandwagon.

See it bigger and see more in his Valley of the Sun slideshow.

WIRED relates that Instagram has decided to remove a controversial piece of their new terms of service (TOS) announced yesterday:

Some or all of the Service may be supported by advertising revenue. To help us deliver interesting paid or sponsored content or promotions, you agree that a business or other entity may pay us to display your username, likeness, photos (along with any associated metadata), and/or actions you take, in connection with paid or sponsored content or promotions, without any compensation to you. If you are under the age of eighteen (18), or under any other applicable age of majority, you represent that at least one of your parents or legal guardians has also agreed to this provision (and the use of your name, likeness, username, and/or photos (along with any associated metadata)) on your behalf.

You acknowledge that we may not always identify paid services, sponsored content, or commercial communications as such.

This did not sit well with, well, anyone. The internet went nuts as users and the media railed against the new ad-centric, privacy-crushing policy. Some went so far as to delete their accounts and move to other photo-sharing services. Instagram reacted Tuesday afternoon with a blog post clarifying its position and promising to amend the offending section of the TOS.

“It was interpreted by many that we were going to sell your photos to others without any compensation,” company co-founder Kevin Systrom wrote in the post. “This is not true and it is our mistake that this language is confusing.”

Yeah. You can read on to see what Instagram “meant” to say and also see what the NYT adds. Definitely check out Forbes’ take on Flickr reaping rewards from the snafu.

I use Instagram (yes, those are my photos) and post all of my photos on Flickr with a Creative Commons license, so I’m probably more comfortable than most with my photos being used for purposes other that being my photos. I can’t help but believe that Facebook (who owns Instagram) was testing the waters to see what’s possible without risking their core brand.

I would be shocked if Facebook didn’t come out with similar policies in the years to come. I don’t know what I’d do, but I certainly agree with Peter Shankman’s advice about posting things to social media sites.

“They’re like 5 year olds fighting over a toy, only the toy is America.”
~One of the Kids 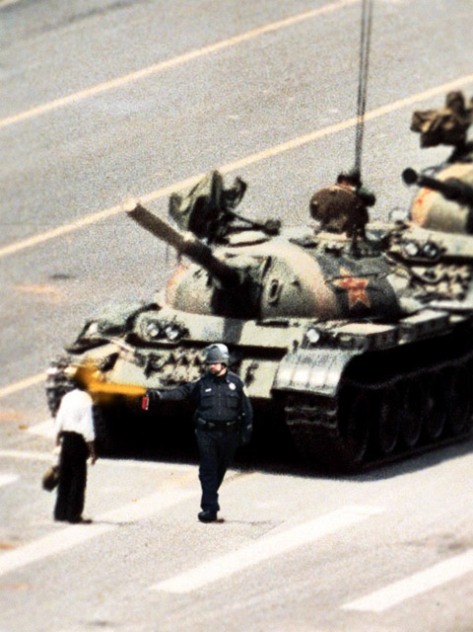 I don’t know who made the original. Found it with hundreds of others on the peppersprayingcop tumblr.

Gawker reports that UC-Davis Officer John Pike, the Pepper Spraying Cop is now a meme (see this one for sure)

Regardless of whether or not Davis – a campus police officer – is representative of anything other than a dude with authority, firepower and poor judgement, I think it’s really strange how polarizing the issue of police violence is.

For my own part, I can’t fathom the situation where a non-violent protester deserves violence in a free society. I am surprised by how many do feel that way.

Mainly for my own future viewing, here’s video of the situation.

SuperDre is one of the Michigan artists who I have yet to see. That sorry state will end at the first-ever Electric Forest*. EF is sponsoring Absolute Michigan, and I’m working to help promote the festival in Michigan. We are giving away a pair of tickets to the Electric Forest Festival this weekend as the kickoff to our Festival Summer promotion, through which we’re going to give away as many tickets to Michigan festivals and events as is humanly possible.

*check out Bob’s interview of Jeremy Stein, founder of Electric Forest and its predecessor Rothbury. 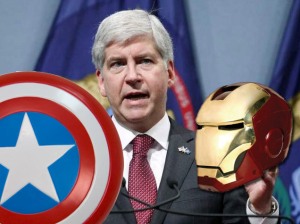 On Absolute Michigan today I wrote a feature on Michigan Governor Rick Snyder’s baffling budget that kills the Michigan Film Incentive. Once again, as Mitch Albom so aptly explains, Michigan has gone out, run 1/2 a block and wondered why we haven’t won the marathon.

Either way, he kills the future of the film/TV/video game industry here. With such a low cap, few new projects will come. Many have pulled out in the last few days. Studios just washed millions down the drain. Folks who moved here to be part of a growing industry will leave again.

And we look like fools. Imagine a state that yells, “Come on in!”, leads the nation in a program — then three years later shuts it down. Would you want to do business here?

Sometimes I really feel we are one of the nation’s stupidest states. Click here to read more, check out Rick is Wrong and watch this video from Mitch Albom explaining the inexplicable.

The photo is by Robert Stucky – check out the 2010 Comedy Festival slideshow!

farlane.blog
Create a free website or blog at WordPress.com.