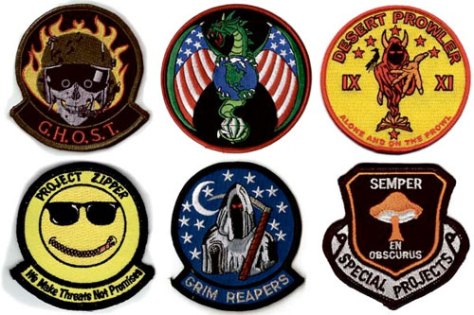 Through Wired I learned of Trevor Paglen and his photography of “black satellites”. Paglen has an exhibit at UC-Berkley, where they explain something about him:

Paglen’s nearly constant subject is the “black world” of the United States government, and through research and visualization he attempts to outline the edges and folds of this hidden world of military and intelligence activities. Whether photographing secret military bases from fifty miles away, or imaging spy satellites in the heavens from earth, Paglen’s photographs embody the limits of visibility, imposed both by the realities of physical distance and by informational obfuscation, that keep us as citizens from seeing and knowing these subjects on our own.

If you head over to paglen.com you can see all kinds of Things That Maybe Should Not Be Seen including code names, limit telephotography and his book I Could Tell You But Then You Would Have to be Destroyed by Me: Emblems from the Black World and an interview with Paglen from The Colbert Report. There’s also a link to a New York Times review of his book that includes a slideshow of the patches. Here’s a couple excerpts:

…The classified budget of the Defense Department, concealed from the public in all but outline, has nearly doubled in the Bush years, to $32 billion. That is more than the combined budgets of the Food and Drug Administration, the National Science Foundation and the National Aeronautics and Space Administration.

…“Oderint Dum Metuant,” reads a patch for an Air Force program that mines spy satellite images for battlefield intelligence, according to Mr. Paglen, who identifies the saying as from Caligula, the first-century Roman emperor famed for his depravity. It translates “Let them hate so long as they fear.”

…What sparked his interest, Mr. Paglen recalled, were Vice President Dick Cheney’s remarks as the Pentagon and World Trade Center smoldered. On “Meet the Press,” he said the nation would engage its “dark side” to find the attackers and justice. “We’ve got to spend time in the shadows,” Mr. Cheney said. “It’s going to be vital for us to use any means at our disposal, basically, to achieve our objective.”

Huge black budgets, US military units taking their mottos from one of the most terrifying figures in history and a growing shadow government … not the cheeriest things to contemplate.